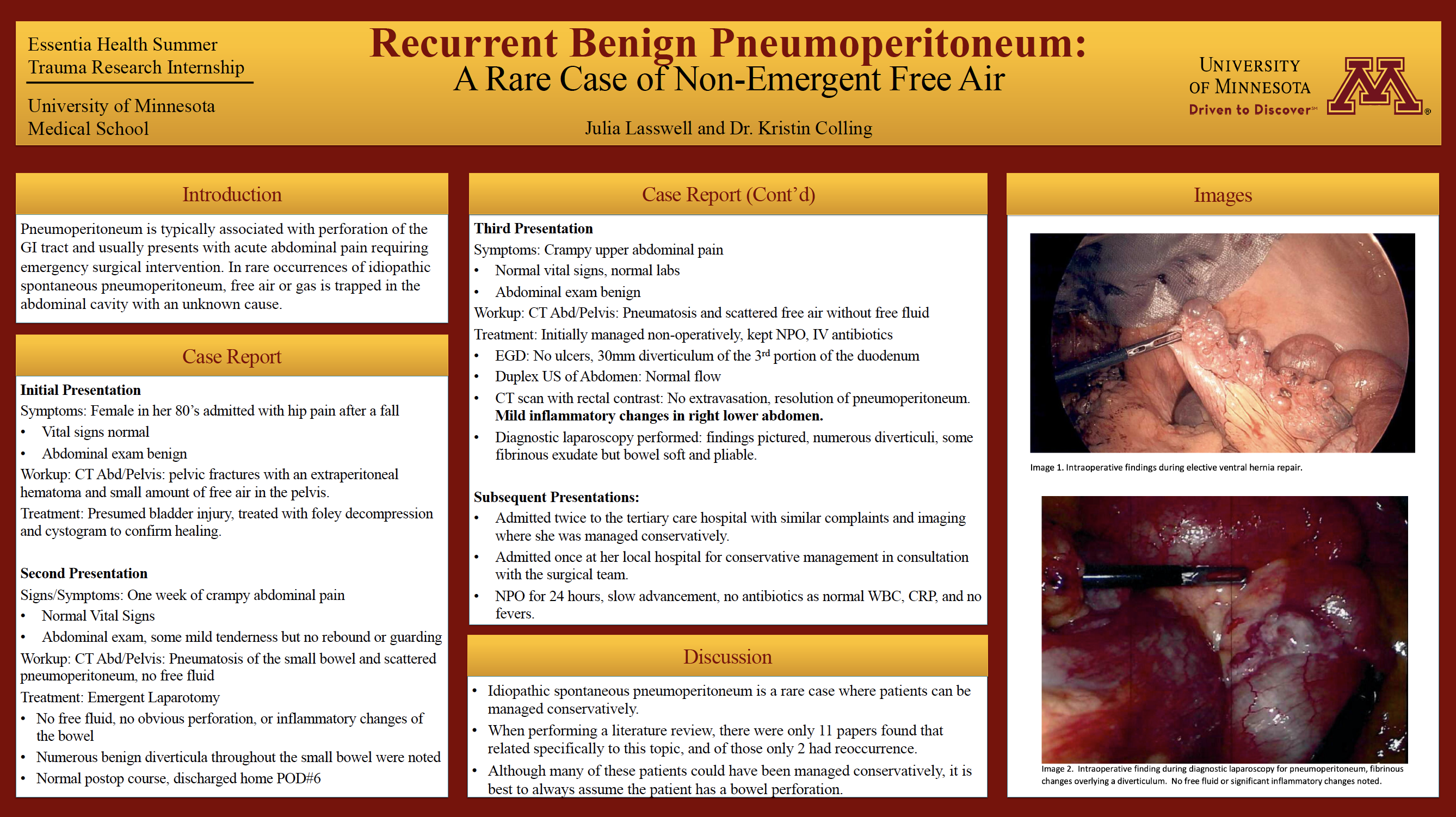 Introduction/Objective: Pneumoperitoneum is the hallmark of perforated bowel and would usually be considered the definition of a surgical emergency. However, rarely free air can be present without leakage of enteric contents and can be managed conservatively. We present a case of recurrent benign pneumoperitoneum and its management.

Case Presentation: A female in her 80s was transferred to our hospital in 2015 with hip pain after a fall. CT imaging of her abdomen and pelvis demonstrated pelvic fractures with extraperitoneal hematoma and small amount of free air in the pelvis. Her abdominal exam was benign. The free air was presumed to be a possible bladder injury and was managed conservatively with foley decompression. Following this admission, she underwent elective laparoscopic ventral hernia repair and was noted to have multiple diverticula of the small bowel with no evidence of perforation. (Image 1) Sigmoid resection was performed without further intervention. In 2016, she was transferred to our hospital again with one week of crampy abdominal pain, normal vital signs and labs, but a CT scan showing pneumatosis of the small bowel and pneumoperitoneum. An emergent laparotomy was performed, however, upon entering the abdomen, there was no free fluid nor obvious perforation or inflammatory changes. Numerous benign diverticula throughout the small bowel were seen. No bowel resection was performed, she was monitored closely, and discharged home 6 days later. Again in 2018 she was transferred with similar symptoms, with normal labs and vitals and the same findings on CT. She was initially managed non-operatively. EGD was performed, and demonstrated no ulcers, but did note a 30mm diverticulum of the duodenum. Enteric vasculature was evaluated with duplex ultrasound, which did not identify any abnormal flow. A CT scan with rectal contrast was performed and showed resolution of the pneumoperitoneum, no extravasation, but mild inflammatory changes were present in the right lower quadrant. As there was now a target for intervention, a diagnostic laparoscopy was performed, however again there was no free fluid or signs of acute inflammation. The only abnormality was in the right lower quadrant where one diverticula had some fibrinous exudate, however the bowel was not inflamed. (Image 2) She was discharged home on postoperative day 2, tolerating regular diet and doing well. Since 2018, she has been admitted for similar complaints 3 times, with 2 admissions managed conservatively with no CT scans performed.

Discussion: Cases such as this are the rare instance where patients with free air can be managed without surgical intervention. We presume that this patient has microscopic perforation of a diverticuli that allowed only air – not enteric contents – out of the bowel. In
review of the literature, 11 papers were identified that reported similar cases, and of those only 2 had reoccurrence.

Conclusion: Recurrent benign pneumoperitoneum is rare, but cases like this are important to remember when managing a patient with an imaging finding that is not concordant with the exam. Free air should be presumed be a perforation of the bowel until proven otherwise, but perhaps laparoscopic or endoscopic evaluation could be considered prior to laparotomy if the patient’s physiology allows, to avoid unnecessary morbidity. 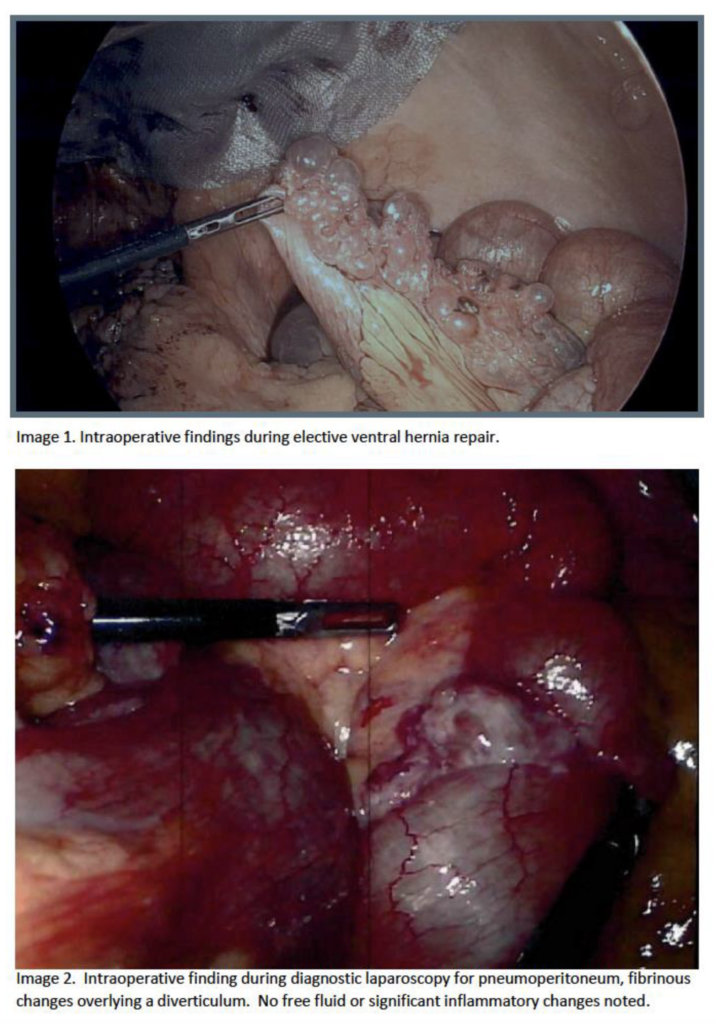 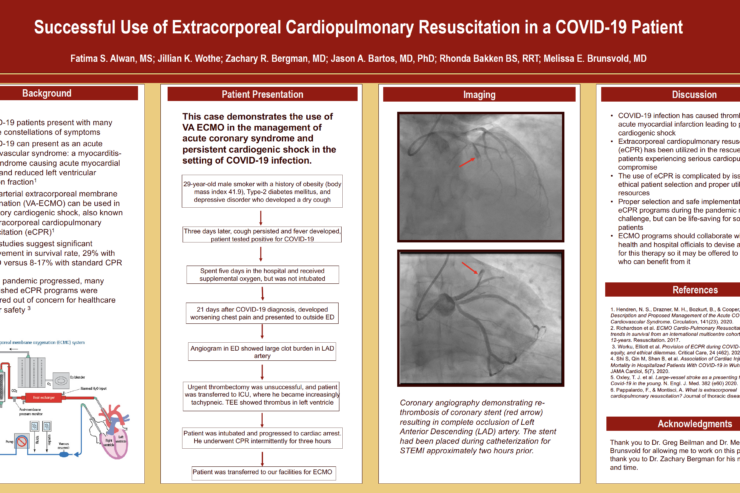 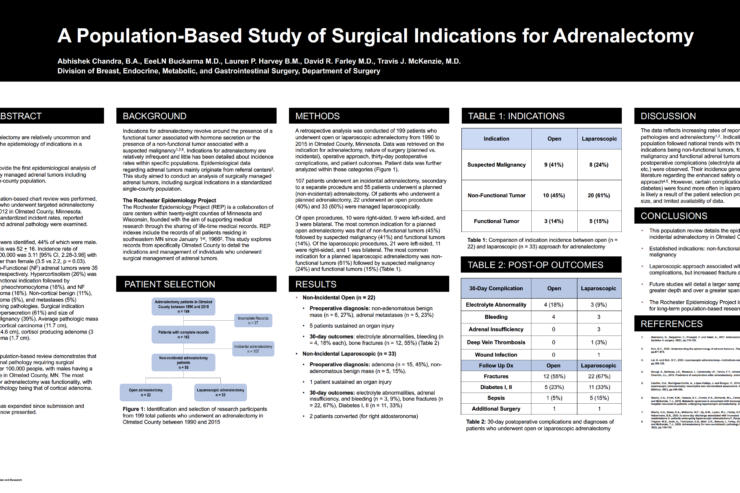 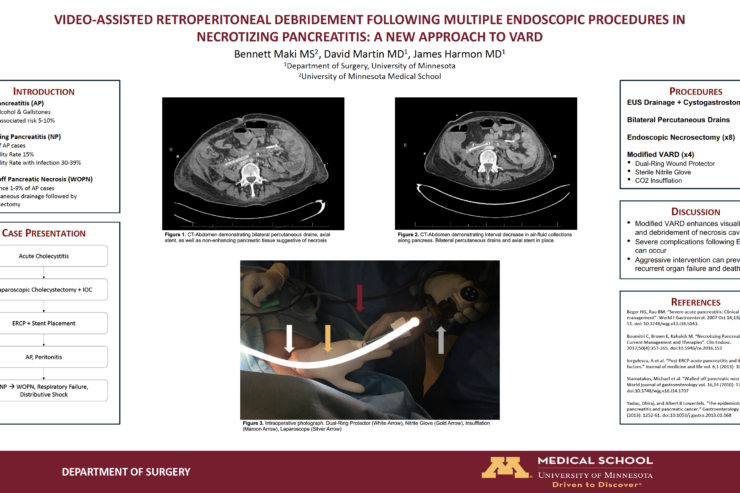